Well it brings me no pleasure to say that this year’s Oscar telecast was sort of a bust.  And I’m not talking about the ridiculously predictable winners (those should come as no surprise to any viewer who’s been around for the past few years).  It’s the fact that in my 17 times watching the Oscars, this was easily the most uneven, confusing, and poorly put together telecast thus far.  But, let’s start with the good moments… 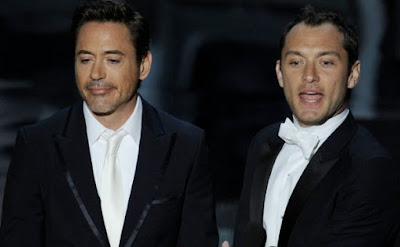 #5 – Presenters Robert Downey, Jr. and Jude Law
As most of the hosts’ banter went from painfully uninspired to just plain bizarre, it was refreshing to see some more old pros on the stage.  Downey Jr.  was charming as ever presenting Best Visual Effects with Jude Law, and it reminded (hopefully) the producers why you never leave the show in the hands of the kids… 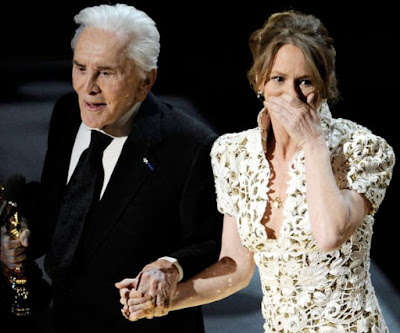 #4 – Kirk Douglas gives the Oscar to Melissa Leo
In one of the more deserving wins of the night (in my humble opinion), Melissa Leo’s bad press was superseded by her great performance.  And thank goodness they were able to pull out at least some stops by featuring an actual legend during the telecast.  Kirk Douglas was charming and witty throughout, and Melissa Leo’s f-bomb at least provided some surprise for the evening… 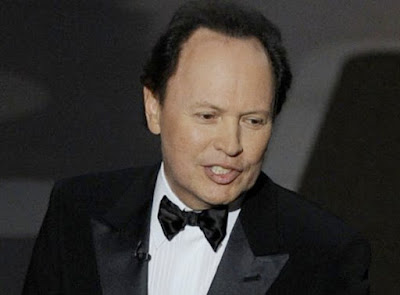 #3 – Billy Crystal saves the day
Mr. Crystal (probably the all-time best host, in my book) put the flailing and unfortunate Franco/Hathaway duo to shame by appearing mid-way through the show to talk about Bob Hope.  He has just as much finesse and style as he did the last time he hosted.  The biggest downside to his typically hilarious and flawless appearance?  It just made me wish that he’d been hosting all along.  (Sorry Anne and James – Billy’s much more of a natural at this.)

#2 – Jeff and Sandra present the lead trophies
At last the show managed some prestige and some class.  Thanks to the eloquent words of Mr. Bridges and the effervescent charm and humor of Ms. Bullock, it felt like the Oscars again at last.  I’m just going to put it out there – if they insist on hiring celebrity actor duos as hosts, can we go for a Bridges/Bullock ticket next year?  They’re so natural on stage, and they’ve actually worked with many of the audience members.   I think the chemistry would be fantastic.

#1 – Cate Blanchett chimes in
After a series of missteps and odd choices in presentations and blips, Best Makeup provided a surprising breath of fresh air as Oscar vet Cate Blanchett gave her two cents following a particularly graphic clip from The Wolfman – “That’s gross.”  Definitely caused the biggest laughs of the night at our get-together.
…and the less fortunate portions 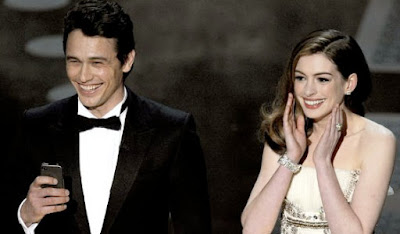 As for the reasoning behind the frustratingly hard-to-love ceremony, it seems to rest solely on choices made by the production team.  Where last year’s ceremony embraced the allure and elegance of the history of the Oscars with homages and speeches that had dignity and grace, the focus on youth culture this time around was a major backfire.  The Oscars should just come to realize that young Twitterers and Twihards will not be watching no matter what.  But us lifelong Oscarphiles will, so try catering to your demographic.
As much as I hate to say it, as Anne Hathaway and James Franco are wonderful actors, the two were a mess as hosts.  Between the awkwardly written banter and Franco’s apparent stoned state throughout, their moments on stage were a little too uneven for my taste.  In fact, as suggested by our roomful of viewers, Hathaway probably would’ve been better working solo, as her lone bits were far superior.  Franco really missed an opportunity by what appeared to be nerves, perhaps?
Aside from the hosts, who aren’t solely to blame, the camera work was a little strange.  Who were those random teenagers that kept showing up on screen?  Were they someone’s kids?  Whatever the reason, the night’s audience shots became a game of trying to locate any recognizable faces in a given frame.  One particular one had about a dozen folks in it, and the only one I knew was Kathryn Bigelow, tucked away in a corner.  And the Coen Bros. nose-picking fiasco was the pinnacle of the poor camera choices.  The whole night seemed to be going off without so much as a rehearsal beforehand.  All too messy and flaky it seemed.  And I will never forgive them for spending more time catering to kids with questionable taste by spending a good two or three minutes paying tribute to Twilight and then left the lifetime achievement recipients a mere few seconds of waving onstage before rushing to commercial.  That’s gross.
**How did you feel about this year’s awards?  Was I crazy to think they kind of stunk from a production standpoint?**
February 27, 2011

I know I’m terrible for waiting this long, but it truly slipped my mind!  Here are my hurried Oscar predictions for the night…

last chance to vote in the mock oscar poll!

Hello all – a reminder to all of you readers out there:  if you haven’t voted in the mock Oscar ballot poll yet, you have until midnight tonight to do so!  The winners will be announced tomorrow prior to the Oscar telecast.  If you want your voice heard for this first-ever Bloggers’ Choice Awards, then cast away!

The votes have been tallied!  After finalizing the mock Oscar ballot poll that I conducted, the nominees have been decided upon, and it’s time to choose your winners.  Through the lengthy process of following Academy procedures for tabulating, we were left with a few surprises.  Leading the nomination count pack was Black Swan with a sizable 11 nods, followed by The Fighter, The King’s Speech, andThe Social Network with eight apiece.  As far as big surprises go, the biggest came with frontrunner The King’s Speech missing out on a Best Picture and Best Lead Actor nod.  In addition, True Grit‘s haul was reduced from 10 to two in our balloting poll.  Academy favoriteBiutiful got nixed altogether, and confusion over its true status led Toy Story 3 to miss out on a screenplay nomination (How to Train Your Dragon led TS3 five to three).  And there was a bloodbath courtesy of Burlesque in the Original Song category – you guys love your Christina/Cher!  So let’s get to the nominations – and don’t forget to pick your winners!

Hello all!  I’m opening the invitation to a poll I’m running to any and all that would like to participate!  I’m going to attempt to tally the votes of you wonderful readers and bloggers through an official balloting system, and we’re going to use Oscar’s method of bringing forth nominations (that really complicated mess of a system that I will try my best to fully understand and use appropriately).  So head on over to the poll to vote in any or all of the categories – your votes are much appreciated and much needed!  The announcement of the results will be made the week prior to the Oscars, when the poll closes.

With the Oscar nominees now announced, it’s time to take a look at the upcoming projects of the newly bestowed honorees. Now, there are many project in the mix for the 20 people nominated, but only some have any stills released as of now. Check out the slideshow below for a preview of what’s to come from our prestigious 20…
http://picasaweb.google.com/s/c/bin/slideshow.swf

oscars have a few surprises yet…

Though Best Picture proved a pretty standard lineup (although not exactly with my predictions – more on that later) there were still a few surprises in this morning’s announcement. For starters, Julia Roberts still must have some swing in Hollywood, as the man she held a torch for, Javier Bardem, came in and pushed Robert Duvall out of the competition for Best Actor. Beyond that, John Hawkes (hometown Minnesota hero – woo!) snuck in for Best Supporting Actor, but unfortunately at the expense of Andrew Garfield. But you still gotta love the fun of a few surprises. A successful Oscar morning again!

[UPDATE]
Well it seems that the nomination leader – by my possibly incorrect count – is The King’s Speech with 12, True Grit managed 10, followed by The Social Network and Inception with eight each. The biggest surprises in the remaining category have got to be I Am Love in costume design (great choice, in my opinion) and the fact that 127 Hours went from “swiftly descending” to “six nominations.” And also, my proudest moment in predictions has got to be picking out The Tempest for costume design. Here’s how I did on predictions:

…so all in all, better than last year’s predictions I believe, but just missing one on practically every category. Bummer Academy!