BEST ORIGINAL SONG: With the frenzy over the new Bond tune, it’s only fitting that my next category set be the music ones. And though I think Adele will have a distinct shot of making it into the category, particularly thanks to the rules overhaul, the series doesn’t exactly have a good track record with their more than 20 original songs through the years. Still, the notion that it shot to No. 1 upon release seems to usher in a hopefully new era for Original Song, a category that I’ve loved through the years despite its many many flaws. Having some legit hits on their hands could make things interesting in a potentially five-wide field of contenders.  But on to the conversation! On paper, the likeliest of nominees is the Hugh Jackman-sung “Suddenly” from Les Miserables, which to me is the film’s best bet at a nomination, whether the movie tanks or not. And with a rich tradition of successes in this category, Disney/Pixar’s efforts could land multiple slots, namely “Into the Open Air” and “Learn Me Right,” both from Brave, with the former the likelier choice. The rules get a bit dodgy for some contenders, though, as Taylor Swift’s number from The Hunger Games, I’m assuming, is out of the running, as it’s the second credit song.  Though I’m not super clear on the rule revisions.  But Arcade Fire’s “Abraham’s Daughter” should have no trouble making it into the conversation for the blockbuster book adaptation. 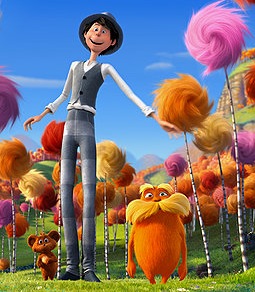 The hit early release The Lorax has a few options to contend with, most notably “Let it Grow,” as the big group number lends itself best to Oscar’s style. And though it arrived with hardly a whimper, it’s worth noting that the Whitney Houston swan song “Celebrate” from Sparkle is a ballot option. It’ll take branch members remembering the movie at all to get it to the top five, though. Norah Jones is featured on the Ted soundtrack, and this may be the simplest way to honor Oscar’s host this year for his surprise hit. “Everybody Needs a Best Friend” is an accessible big-band-style ditty, though the Academy has skipped over previous opportunities to feature Jones’s soundtrack vocals. And though Lawless will likely miss any kind of attention during awards season this year, there’s a chance the legendary Willie Nelson could net it a slot in Original Song with “Midnight Run.” Finally, there are some options yet to come – Disney’s Wreck-it-Ralph has a handful of original works, with Owl City’s “When Can I See You Again?” seeming the most plausible choice.  But to the rundown; here’s where things stand, in my opinion:

The Locks: Though the category is so unpredictable, it’s tough to legitimately call anything a true lock, my guess is “Suddenly” (Les Miserables) and “Skyfall” seem the strongest – and with the revamp, Oscar just wouldn’t be able to resist having Jackman and Adele perform at the ceremony.
Strong Options: “Into the Open Air” (Brave) and “Midnight Run” (Lawless)
My Current No. 5: I think the current lovefest toward Arcade Fire may nab The Hunger Games one of its nominations here for “Abraham’s Daughter.”
Rounding Out the 10: “Let it Grow” (The Lorax), “Learn Me Right” (Brave), “When Can I See You Again?” (Wreck-It Ralph), “Celebrate” (Sparkle) and “Everybody Needs a Best Friend” (Ted)
Just Outside the Ranks: “Touch the Sky” (Brave), “Open Up” (This Must Be the Place), “From Here to the Moon and Back” (Joyful Noise), Karen O’s “Strange Love” (Frankenweenie), “Still Allive” (Paul Williams Still Alive), and Beck’s “Looking for a Sign” (Jeff Who Lives at Home)
And the Rest (In No Particular Order): “Arietty’s Song” (The Secret World of Arrietty), “Deep in the Meadow” (The Hunger Games), “Rise” (Chimpanzee), Soundgarden’s “Live to Rise” (The Avengers), “This is the Place” and “Nobody Needs a Thneed” (The Lorax), Florence + The Machine’s “Breath of Life” (Snow White and the Huntsman), “Big Machine” (Safety Not Guaranteed), “We Are” (Ice Age: Continental Drift), “I’m a Man” and “Love Will” (Sparkle), “The Sword is Yours” (This Must Be the Place), “Wreck-It, Wreck-It Ralph” (Wreck-It Ralph), Dolly Parton and Queen Latifah’s “Not Enough” (Joyful Noise), “Wide Awake” (Katy Perry: Part of Me) and “Love Always Comes as a Surprise” (Madagascar 3)

BEST DIRECTOR: With the Best Picture race all over the place, the directors’ club is lining up its top contenders in the category.  The easiest route is to assume the top BP frontrunners will line up with the BD counterparts, which I’m thinking is a good assumption at this stage.  With Paul Thomas Anderson (The Master), David O. Russell (Silver-Linings Playbook) and Ben Affleck (Argo) cementing themselves as near-locks, it seems the final two slots are still up for grabs. And a lot depends on how their respective films land.  Wes Anderson (Moonrise Kingdom) and John Madden’s (The Best Exotic Marigold Hotel) films have arrived and are proportionate successes, though they’d need BP nods to make it here.  And Benh Zeitlin (Beasts of the Southern Wild) may have an uphill battle with the recent SAG announcement to do with his film.  Other possibilities hanging ’round are the major leaguers – Christopher Nolan (The Dark Knight Rises), Joss Whedon (The Avengers), Peter Jackson (The Hobbit) and Quentin Tarantino (Django Unchained) – the latecomers – Juan Antonio Bayona (The Impossible), Sacha Gervasi (Hitchcock) and Gus Van Sant (Promised Land) – and the foreign helmers – Michael Haneke (Amour), Martin McDonagh (Seven Psychopaths) and Ben Lewin (The Sessions).  But here’s where I see it as of now.
All Locked Up: Paul Thomas Anderson (The Master) and David O. Russell (Silver-Linings Playbook)
So Close: Ben Affleck feels like a mighty wise prediction at this point, but I’m holding out to make certain the movie is a hit with audiences as well
Current Final Two Slots: Steven Spielberg (Lincoln) – though I’m thinking this is a thin margin between nominated and just-miss – and Robert Zemeckis (Flight)
Only If the Movie Doesn’t Flop: Tom Hooper – he’s a recent winner with a possibly juggernaut awardsbait in Les Miserables – and Ang Lee – Life of Pi has had some detractors on the festival circuit, but it still looks to land some nominations somewhere
The Rest of the 10: Kathryn Bigelow (Zero Dark Thirty), Benh Zeitlin (Beasts of the Southern Wild) and Wes Anderson (Moonrise Kingdom) 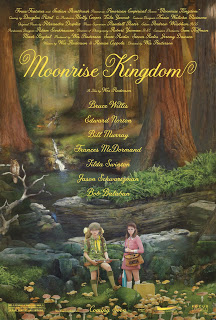 BEST ORIGINAL SCREENPLAY: While PTA’s The Master is tops on the list of many predictions, I’m sitting pretty solid with the Wes Anderson/Roman Coppola-written Moonrise Kingdom as frontrunner, for a nomination at least.  This is the category that has honored such surprise hit comedies as My Big Fat Greek Wedding and Bridesmaids – seems only fitting that Moonrise leads the likelihood pack.  Coming up quickly in the buzz fest are Ben Lewin’s The Sessions, John Gatins’s Flight, and Martin McDonagh’s Seven Psychopaths.  Aside from the most obvious choices, what of the quiet forces that could play a role with the right campaigns – such as Nicholas Jarecki (Arbitrage), Craig Zobel (Compliance) and Seth MacFarlane/Alec Sulkin/Wellesley Wild (Ted)? Perhaps voters are looking to honor their newest host. Plus commercial successes on several scales abound – Andrews/Purcell/Chapman/Mecchi (Brave), Reid Carolin (Magic Mike) and Rian Johnson (Looper).  But here’s where I think the predictions line up at the moment.
The Locks: The Master and Moonrise Kingdom
Feeling Right for Now: The Sessions, Django Unchained and Flight
The Near-Misses: Seven Psychopaths, Amour, Arbitrage and Zero Dark Thirty
Current No. 10: Hyde Park on Hudson

BEST ADAPTED SCREENPLAY: Like most other categories, Silver-Linings Playbook is leading the crowd rather handily here.  But with Argo looking to make a solid category sweep as well, it’ll maybe be a two-way race for the win.  But what of the fellow nominees? Big-namers Tony Kushner (Lincoln), Tom Stoppard (Anna Karenina), Walsh/Boyens (The Hobbit), the Nolans (The Dark Knight Rises), Penn/Whedon (The Avengers) and John Krasinski and Matt Damon (Promised Land) could prove forces in the race.  Plus hit films lauded for their writing, including Lucy Alibar and Benh Zeitlin’s Beasts of the Southern Wild and Michael Bacall and Jonah Hill’s 21 Jump Street, could fare all right – though both seem like they’d be more likely prospects in the original counterpart of this category.
The Locks: Silver-Linings Playbook and Argo
Feeling Right for Now: Lincoln, Life of Pi and The Avengers
The Near-Misses: Cloud Atlas, The Dark Knight Rises, Promised Land and Beasts of the Southern Wild
Current No. 10: Anna Karenina