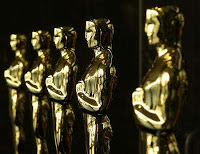 I know my blogging has been virtually non-existent this Oscar season, but that doesn’t mean I’m devoid of excitement for the big day today.  So in the spirit of getting it officially on paper, here are my predictions for tonight’s big contest:

It’s about time these predictions got a little bit of an update.  It’s been since mid- to late-July since I took a gander at them.  Now, these don’t reflect the most recent hubbub – the gaga for Shame that’s going on on the festival circuit – but I’m still sticking to them!  As you can see, we have a new winner, as The Girl with the Dragon Tattoo has sunken slightly in my rankings. Take a click at that list to the left of the featured categories!

Well, I almost kept to my promise of completing my prediction updates in a week and a half… it took about two instead.  (Better than more than a month, though, no?)  Anyway, below is the nomination count I currently am predicting.  Take a gander at all the categories in the menu to the left, and get those comments out in this post! 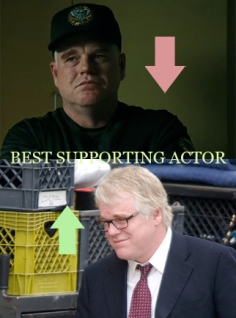 The updates continue.  (In fact, you can expect the bulk of the rest of them will be completed on Tuesday.)  For now, though, the big six have been completed.  Previously, Picture, Director, and Lead Actress were revised.

This time around, we’ve got Supporting Actor, which didn’t see a whole lot of shifting (Where are the guys of 2011 and why haven’t they made themselves more obvious?), other than my decrease in over-confidence about Moneyball, which caused me to swap my Philip Seymour Hoffman placements.  Looks like Jonah Hill might be a stronger candidate than Hoffman in the end for the former, but the Oscars love him, so I’m promoting the latter. 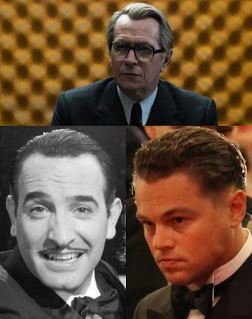 As far as Lead Actor, things just keep getting weirder with the Sean Penn This Must Be the Place performance – the teaser is interesting but wholly bizarre, and buzz is getting a little spotty now.  Beyond that, Dujardin and Oldman got promotions due to high praise and very intriguing promo material.  Oh, and a Ryan Gosling canceling out situation seems so unfortunately likely at this point.

In the Supporting Actress category, it seems as though The Artist‘s taking over my charts and Extremely Loud and Incredibly Close getting a 2011 release has shoved out Chastain and McTeer in favor of Bejo and Bullock. 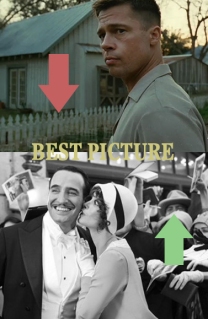 All right folks.  For those of you wondering, some bizarro script in my coding was slowing down the ol’ blog, but all is well again!  So please come back!  Now on to new news… So may trailers and posters and release dates have been announced since last I updated the prediction pages, so I figured it was high time to get on that.  And since Tuesday is my merciful day off from work, what better time?  And this time I promise it won’t take a month and a half.  (So I expect you to hold me to that.)

Starting off with Best Picture, consider some feathers ruffled.  My uber-confidence in The Tree of Life has certainly waned now that I’ve seen it – I doubt its ability to stick with voters with its surrealistic nature.  In other news, the Weinsteins are stepping up their game by snatching up big-name awards bait such as The Artist, The Iron Lady, and W.E.  Artist may just be the strange little anomaly that ends up with 10 nominations.  Which begs the question that I’ve plagued with – which seemingly ordinary movie is going to encounter sudden end-of-year success both financially and critically and land 10 nods a la True Grit? 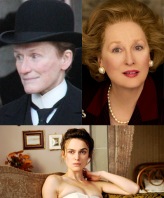 Next up, be sure to check out Best Director and see how you feel about my choices.  Not much has changed there other than Malick getting bumped for Fincher’s rising star.  Anyone else think Dragon Tattoo: America is going to make a lot more ripples than its Scandinavian counterpart?

And of the ladies actressing for the best of 2011 status, everyone’s constantly talking about the showdown between Glenn Close and Meryl Streep… but what of Keira Knightley?  That new trailer is telling me that she could be the Portman spoiler to Close/Streep’s Bening.  I don’t think voters are really over their obsession with youth yet.  Plus that Knightley scene looks meaty to the max.

Well, it only took about a month and a half, but I’m finally done updating my Oscar predictions.  Check the menu in the top left to take a gander at the new finished categories – Best Film Editing, the sound and music categories, and Best Animated Feature.  And here’s my most recent nomination tally below:

10 nominations
The Tree of Life
8 nominations
War Horse
6 nominations
J. Edgar, Carnage
5 nominations
Moneyball, The Girl with the Dragon Tattoo
4 nominations
The Descendants, The Help, The Iron Lady,
Hugo Cabret
3 nominations
The Ides of March, Albert Nobbs, Super 8,
Harry Potter and the Deathly Hallows Part 2,
Transformers: Dark of the Moon,
Adventures of Tintin
2 nominations
We Need to Talk About Kevin,
My Week with Marilyn, Captain America,
The Muppets, Cars 2
1 nomination
This Must Be the Place, Coriolanus,
A Dangerous Method, Rampart, Young Adult,
The Rum Diary, Pirates of the Caribbean 4,
Rango, Rio, Winnie the Pooh
June 12, 2011 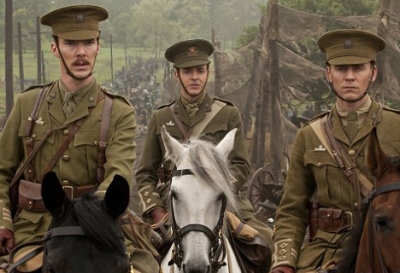 In honor of the Tonys playing out tonight, and an inevitable trophy for set design and such for the play War Horse, I thought it the best time to do a bit of updating on my Art Direction predictions for Oscar (just scroll down below the Cinematography and Costume Design sections).  And yes, War Horse has risen in the ranks.  I doubt its potential in acting and writing, but art direction seems like a sure thing.  Check out the picks, and let me know what you think, readers!